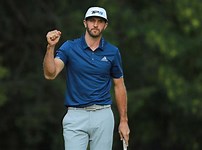 a near miss in Boston at the LIV event with Cam Smith missing the play off by one stroke, after missing a putt on the final green! Not a good weekend for us in Denmark as both of our selections could not do anything.

I did say to you previously that these DP World Tournaments are being contested by a group of twenty golfers capable of winning week to week. Those guys were in contention again last week. However, Oliver Wilson emerged from the back of the field to land the win at 250/1. Oliver does have talent but does have some very poor rounds as the weeks go by. But he managed to string four rounds together and get the win. He beat the consistent Ewan Ferguson by one stroke in what was a birdiefest on a course that was short and playing easy. The unknown Norwegian K K Johannssen finished third. The two Matthew’s, Jordan and Southgate finished joint fourth.
John Catlin had a good first two rounds and was in contention. But a poor weekend pushed him down to twenty second place. Lucas Bjerregaard had an opening round sixty-five on Thursday but was average for the rest of the week and finished in forty first place. Richard Mansell had a disastrous seventy-six on Saturday which ruined his chance of a top twenty finish.

Dustin Johnson beat Abirhan Lahiri and Joachin Niemann in a play off on Sunday to take the win. Our selection Cam Smith missed the play off by one stroke. But his 69 on Saturday on what looked an easy course did him in really. Abraham Ancer missed a place, finishing eighth. It is hard to gauge these fifty-four-hole tournaments but obviously a quick start and no bad rounds are a must.

We will be back Tuesday PM with initial selections for the action at Wentworth this week.