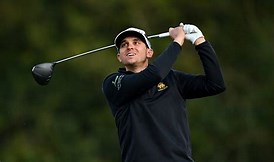 we made a profit of 48 points last week in regard to our outright selections. John Catlin (pictured above) won the Austrian Open in a play off. We put him up at 45/1, that was readily available and bigger on the exchanges. In South Carolina Charley Hoffman and Collin Morikawa failed to place for us despite being in contention to do so going into the final round.

On a MONDAY we only consider the outright selections and update our performance table onsite (Google sheet) accordingly. On a WEDNESDAY we consider the trial of tournament match bets and update records accordingly then. These bets are treated SEPARATELY.

By the way….it is OK to say well done to us when we have a good priced winner. You can email us when we win and not only if we have a losing week.

The analysis of both tournaments follows:

John Catlin of the United States (one of my golfers to watch in 2021) got the better of the German Maximilian Kieffer at the fifth hole of a play off. Catlin held his nerve to hole crucial putts on the eighteenth green to see off Kieffer, who found the water three times on the fifth time they played the par three. This was the third time in eight months that Catlin has won on the European Tour, carding a final round 65. He appears to be a match for most on courses that suit his game, as we highlighted in the selections post. He seems to be a golfer going places.

In third place was tour stalwart Martin Kaymer. He was three strokes back and does struggle to win these days. In fourth was the best placed home country entrant Wil Besseling. Marcus Armitage was the highest placed UK golfer in fifth place. A consistent top 10/20 finisher who never wins.

The weather was cold all week, especially the first two days. It also rained on Sunday. A real test of resolve.

I did highlight the lack of value in the 10/1 you could get on Thomas Detry pre tournament. He finished in a tie for 71st and carded a final round 82. I did tell you.

Notables to miss the cut – Nicolas Colsaerts, who seems to be a shadow of his former self these days. Justin Harding, another golfer initially fancied by the bookmakers who I said would not contend. More proof of my point that odds setters in golf are not that on the ball and struggle to take the course they are playing that week into account.

Forty seven year old Stewart Cink won by four strokes after carding two opening rounds of 63 and gaining a clear lead. Collin Morikawa appeared to be his only credible challenger going into the final round. But after birdieing the first hole on Sunday had a putting crisis and eventually had a melt down to finish in a tie for seventh. Cink plotted around on Sunday and no one could go really low to challenge him.

In second place, there was a tie, Harold Varner and Emiliano Grillo . Varner carded a final round 66 to add to his opening round of the same score. Grillo played well every round. He is very streaky and so you never know what you will get with him. In a tie for fourth place was the in form Corey Conners, Maverick McNealy and Brit Matt Fitzpatrick. Six strokes off the winner. Solid efforts from these three .

Other golfers to note – Cameron Smith opened with a 62, finished with a 66,but had a 71 and 74 in between! He was in a multiple tie for ninth place.  Shane Lowry was part of that tie. He struggles to put four rounds together. A 65 and a 66 showed that he could go low when playing well. I got Russell Henley wrong. I did say he was a good ball striker but was inconsistent. He had a going week at Hilton Head and was in that multiple tie. Another golfer in that tie was defending champion Webb Simpson. Webb is struggling to get it done in 2021. Dustin Johnson came back to life. A final round 66 got him up to a tied thirteenth finish. Daniel Berger had two good rounds to get into the DJ tie. Charley Hoffman had a final round 71 that dropped him down to tied eighteenth. Matt Wallace was in that same tie. Matt was inconsistent this week. his scores were 65,72,65,73 .

Tyrrell Hatton was also inconsistent, 73,66,73,66. Only good enough for thirty ninth place. Will Zalatoris tired over the weekend after his Masters exploits. Lee Westwood continues to struggle, finishing sixty third.

We did not get this one right!

I will back Tuesday PM with initial selections for this week on both tours.