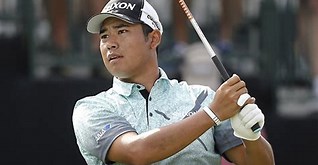 we broke even at Augusta thanks to our in play bet on Hideki Matsuyama. Hideki managed to hold onto his lead on Sunday, although by close of play it was whittled down to one stroke from four at the start of the day. Most of the golfers in contention made errors on Sunday, the most notable being Xander Schauffele, who made triple and double bogeys in the final round, but lost by only three strokes.

Runner up was Will Zalatoris, who was consistent all week and carded a final round 70. His putting was his only weakness and he looks a future winner for sure. In third place was the much hyped Jordan Speith. He too was consistent all week in scoring but mixed sensational shots with multiple errors. Jon Rahm finished with a 66 to tie for fifth place with Marc Leishmann of Australia. Rahm did not arrive until Wednesday after the birth of his first child. Not a good preparation which told until he got going on Sunday. He does look a future Masters winner.

Justin Rose could not build on his opening round of 65 on day one. He finished in a tie for seventh. His putting was not what it should be at this level. Patrick Reed, a past Masters winner in 2018, finished with a 69 for a tie in eighth place. The 75 he had in round two knocked him out of this one. If you want to win tournaments you need to keep that big score off your card. Reed will be back next year and is one to have on the short list. Corey Conners tied with Reed, keeping up his good run. Cam Smith and Tony Finau crept in to the top ten but never looked like contending.

Our pre tournament bets – they all lost. Brian Harman was the best. He was tied third at the halfway stage but had a weak weekend and dropped out of the places. Rory McIlroy was bad again. I did think that the work he is doing with Pete Cowan would begin to pay off. But that was wrong and they need more time to sort out Rory’s game. Sergio Garcia was poor from the start on Thursday and a low score was out of the question after the first three holes. He eventually missed the cut, which is very weird for him at Augusta. In regard to the tournament match bets – Lee Westwood was poor and he seems to have lost his form after his two second places a month ago. Another cut misser. Dustin Johnson also missed the cut. I am really surprised about that at Augusta. His opponent Bryson DeChambeau was not great all week and was easily beatable. Not a good week.

Other players to note – The flying Scot Robert Macintyre finished in a tie for twelfth place. A great effort on his first appearance here. Tyrrel Hatton had a closing 68 to make the top twenty. By far his best effort at the course. Scottie Scheffler played solidly all week to make the top twenty finishers. Shane Lowry played well but lacks the ability to have a low round at present.

Justin Thomas was in the thick of it at the halfway stage. However he had an eight on one hole on Saturday and that derailed him. He finished ten strokes off the lead. Paul Casey was much touted this week but failed to deliver apart from a closing round 69. Bryson DeChambeau finished in a tie for 46th place.

Not a vintage Masters overall and a missed opportunity for many a top golfer.

I will be back Tuesday PM with initial pre tournament selections for this coming week on both tours.