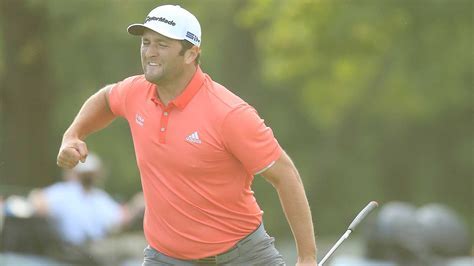 another excellent week for the service. We made a profit of 32.2 points this week and we are cumulatively 91.84 for 2021 to date. Almost at the 100 points profit target already.

Jon Rahm won his first major and we were on at 10/1. Brooks Koepka placed for us at 18/1. Matthew Woolf, our 200/1 pick was right up there until the final nine holes on Sunday. And our in play selection Bryson DeChambeau was leading with nine holes to go but imploded off the tee and his game came apart.

Our analysis of how things went is detailed below.

We will cover the trial ‘Top’ markets selections in Wednesday’s post.

Jon Rahm birdied the 17th and 18th on Sunday with long snaking putts to win his first major by one stroke from Louis Oosthuizen. Whilst other big names were failing on the back nine on Sunday, ‘The Hammer’ blitzed the final two greens when the pressure was on. The world number one now has his first major win.

The runner up was Louis Oosthuizen, who did what he usually does in majors, contended on Sunday but failed to find the winning putts. A gift for each way punters in majors. As always Louis played well without getting it done. But he now must look forward to The Open at Royal St Georges, a course which will suit his canny game.

In third place was Harris English, who finished with a 68 on Sunday, when others were going backwards. He finished three strokes behind the winning score. In joint fourth were Brooks Koepka, Collin Morikawa and Guido Migliozzi of Italy. Koepka had chances to win but his putter let him down on occasion and he also had issues scrambling. But a big win is not far off for him. Migliozzi is known for his fast finishes on the European Tour and he did the same here by chipping in and holing some long putts. Morikawa needs to putt better, as the rest of his game is capable of winning several majors in the future.

Then we had a multi tie for seventh place – Branden Grace had a 67 to finish well; Daniel Berger a 68; Paul Casey did his usual thing of looking like contending in a major and then dropping away; Xander Schauffele did his usual of a mix of great shots and sloppy errors. That is why he does not win. Scottie Scheffler was very steady and putted well; Rory McIlroy put himself in possession early on Sunday and got to within one stroke of the lead. But then got a bit wild and had a cold putter and faded away.

Others to note with a top 20 finish – Francesco Molinari continued his good run of form with a tied 13th finish. His 76 in round two killed off any change he had. Russell Henley was joint leader going to the final round. The 76 on Sunday did for him. Patrick Cantlay tied for 15th place . The 75 on Friday did for him. In the multi tie with Cantlay was Matthew Woolf. Always up there until the final nine holes on Sunday, Woolf showed that he can compete again at the highest level. Another of the overnight leaders. Mackenzie Hughes, had a bad day on Sunday including his ball getting stuck up a tree. He carded a closing 77. Patrick Reed had a good finish with a 67 to tie 19th place. But as I have said in the past he needs to play well in the early rounds to have a chance to win.

The tie for 19th place was star studded. Sergio Garcia, never in things but closed with a 68; former master champion Charl Schwartzel; the ever steady Brian Harman; Mr over rated Jordan Speith; The struggling Justin Thomas and last but not least Dustin Johnson, who played well in parts but was also very wayward.

Other golfers to note – Masters champion Hideki Matsuyama carded 69,76,74,68 . Up and down as they say. Bryson DeChambeau led the tournament with nine holes to go. But he came home in 44 strokes, largely attributable to finding trouble off the tee and not being able to gouge his way out of it. Unsure as to whether his current strategy in tournaments is working ?

Lee Westwood, fresh from his latest wedding, was going well but then carded a final round 77. Lee finished in a tie for 46th place. Rafa Cabrero Bello was a first round leader, as he is always capable of doing. But he cannot keep it going over four days and tied 50th place. Included in that tie with RCB was Gary Woodland, who cannot quite pull it together lately. Matt Fitzpatrick continues to be off his game . He was well back with a score of nine over par. Phil Mickelson could not get anywhere near winning the major he requires for the career slam. An eleven over par score was all he could manage. Shane Lowry was tipped for this one but was not good all week and had a 79 on Sunday, He now steps forward to defend the Claret Jug next month.

Some notables to miss the cut – Cam Smith, whose good run of form has definitely deserted him. Bernd Weisberger, who won in Denmark recently but otherwise has been poor. Last weeks winner Garrick Higgo got off to a bad start on Thursday with a 76 and could not pull it back. Tyrrell Hatton, who was good the week before but had a shocker on Friday. Will Zalatoris has not been playing much and it showed at Torrey Pines with two weak rounds.

Tony (I never win) Finau was bad, as was the suddenly out of form Abraham Ancer. Recent winner Jason Kokrak struggled on both of the first two days. Webb Simpson has been very picky with when he plays since covid plagued us. He was well out of things here, being ten over par after two days. Finally Justin Rose had a nightmare couple of days. Thirteen over par saw him go home early on Friday .

Viktor Hovland had to withdraw part way through his second round. He got sand in his eye from a bunker shot and had trouble with his vision. We wish him well.

So, Jon Rahm got off the mark in majors at the twentieth try. I am sure that there are more to come for the current world number one. The course held up well and was a challenge for Golf’s elite.

I will be back with selections for this week’s tournaments Tuesday PM.