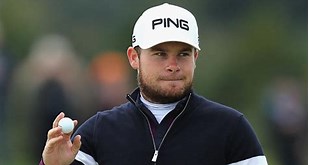 in total we lost one and a half points last week on our bets. We had a win with the in play bet on Tyrrell Hatton in Abu Dhabi and Abraham Ancer placed at La Quinta . Our other runners were all disappointing. I go into detail as to how they all went in the blog below.

Was won by Tyrrell Hatton by four strokes after a closing round of 66 . Going into the final day the big three UK golfers were going head to head for this Rolex series event . However Hatton burnt both Rory and Tommy Fleetwood off with some excellent golf. Hatton must now look towards winning a major as to the next stage of his career. We won us 4.5 points from our in play bet on Hatton .

In second place was Jason Scrivener of Australia. He too finished with a 66 to pass Rory and Tommy on the closing holes. A regular performer on the European Tour, Scrivener needs to get a win or two to propel him up to the elite level. Rory McIlroy hung on to third place with a closing 72 . Rory led going into the final round and started well in the early holes. However his overall play became wayward and he missed most of his crucial putts. Rory had par 72’s in rounds two and four and you cannot do that and expect to win .

In fourth place was Rafa Cabrero Bello of Spain . His 73 on Saturday knocked him back and he finished six strokes off of the winner. I think that Rafa plays better when chasing rather than leading and so we do not know how he would have gone if he was one of the leaders going into Sunday? Tied in fifth place were the American David Lipsky and Marc Warren of England. Both are tour regulars and do contend a few weeks each year .

Matt Wallace played well again without really contending . He finished tied 7th . Also in that position amongst others was Tommy Fleetwood . Tommy started poorly on Thursday and was three over par early. However he pulled it back to be only two strokes off of the lead after round three . Having won here twice Tommy looked set to contend on Sunday but carded a 73!

Danny Willett showed some signs of life with a closing 68 to make the top twenty finishers . Robert MacIntyre played well in snatches but could make the top twenty and no more . Victor Perez was not on a going week and finished 46th with a closing 76!! Justin Rose was decidedly average in tied 57th and has not yet got near to getting his best game back . Lee Westwood started well on Thursday and for part of Friday. But then he was poor which was surprising . Lee finished two over par in a tie for 62nd and lost us two points on the week .

Justin Thomas missed the cut and was poor value at 13/2 pre tournament as highlighted here. He is not the best away from the U.S. and he got to return home on Friday evening . Very surprisingly Matt Fitzpatrick missed the cut also . Matt usually plays well in the Emirates . He costs us another three points on the week . Laurie Canter was not good and missed the cut comfortably and cost us one point . He will be back though . Down in 102nd was Martin Kaymer, a three time champion here in the day . But that was a while ago now and that Kaymer has long since gone . I was very surprised to see some pundits tipping him here based on current form . Ian Poulter’s bad form continued here. He finished tied 107th . Two more cut misser’s .

So, the in play bet on Hatton saved us here . We lost 1 1/2 points on this tournament . In hindsight we should have had Hatton instead of Fitzpatrick . It looks obvious now .

Was won by Si Woo Kim of South Korea by one stroke from the fast finishing Patrick Cantlay, the pre tournament favourite . Kim was a joint overnight leader and a final round 64 was enough to get it done . Kim has already won on tour and at age twenty five has plenty more to come . He is either hot or cold, full throttle out . Therefore his wins will be few and far between but will come . Cantlay made the cut on the mark on Friday evening but carded a 65 and a final round 61, which is the new course record . Cantlay was the best golfer in the field but his second round 71 did for him here .

In third place was Cameron Davis, who carded a 66 and 64 over the weekend to cut through the field. In Fourth was Tony Finau, who was solid all week but lacked the ability again to putt well and finish off a tournament . Tied for fifth was Abraham Ancer, our main pre tournament fancy . His 73 on Saturday put him out of it but with the pressure off he finished with a 66 and gave us a five point profit on him .

Francesco Molinari found some form to finish in a tie for eighth. Very consistent all week but looking a bit overweight to me. He may well come on for this and start to contend on tour again? Paul Casey was also in a tie for eighth place. His opening round 72 made things difficult for him .

Our in play pick, Richy Werenski, had a shocker in the final round, carding a 75. What a bad pick and a loss of one point . Adam Hadwin had two rounds of 66. However he also had a 72 and a 74 on a low scoring track . A loss of 2 points for us . Andrew Landry was ordinary at best here and finished tied 64th . He lost us one point .

Among those who missed the cut here were – Scottie Scheffler, second favourite and rookie of the year; the out of form Patrick Reed; the struggling Brooks Koepka; last weeks winner Kevin Na and tournament host Phil Mickelsen, who carded eighteen pars on Saturday .

We broke even on our bets at the American Express .

Not one of our best weeks but saved by Tyrrell Hatton winning and Abraham Ancer rallying to place .

After three weeks of 2020 we are two points down in total. And that is with a number of poor efforts from certain players and two runners up . We will improve in the coming weeks and get in to a decent profit before too long. It is a marathon and not a sprint to one hundred points profit in a calendar year.

I will be back Tuesday PM with this coming weeks selections.