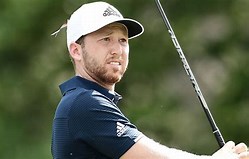 a six point profit for us at Pebble Beach, thanks to Daniel Berger delivering as our second in play selection. We had a near miss with Nate Lashley as he was the joint leader on the sixteenth tee but had a putting disaster there and had a triple bogey. Unfortunately with only four places in play, we missed the place return as well. Our other selections were both in contention, Patrick Cantlay played well but had a cold putter apart from Thursday. Kevin Streelman made a run over the weekend but the sixteenth did for him as well, where he had a double bogey. But all of our picks did contend.

Daniel Berger won by two strokes, finishing with an eagle on eighteen. He did play well all week and recovered from an 8 on the eighteenth on Saturday. Berger now needs to consolidate his place in the world top ten. He will also be looking for a Ryder Cup place.

Maverick McNealy, one of our golfers to watch in 2021, finished with a 66 to claim second place. McNealy grew up at Pebble Beach before going off to Stanford. He clearly showed his liking for the course. In joint third place was Patrick Cantlay and Jordan Speith. Speith led for the second week running going into the final round. However his play off the tee let him down and his putting was not good enough. Speith is not far off winning on current form, he just needs to take more care off the tee.

Tied for fifth were Paul Casey and Nate Lashley. Casey did not tire after his recent exertions but will things catch up with him soon? We have already mentioned what happened to Lashley.

Honourable mentions for – Russell Knox, who played well all week and finished twelfth; Tom Lewis, who despite a 74 in round two, finished in joint fourteenth place and Matthew NeSmith, who had a top twenty finish despite an opening 74.

Other golfers to note – Henrik Norlander opened up with a 64 but was poor the rest of the week; Will Zalatoris lost his recent good form, carding a 74 and 75 in rounds two and three and Francesco Molinari who struggled after recent good efforts and finished tied sixtieth.

Missing the cut – Si Woo Kim, better known as Mr Inconsistency; Rickie Fowler (again); Rafa Cabrero Bell0, he can be good but he can be bad, and Phil Mickelson, a five times winner at Pebble but ten over par this week.

So a winning week for us but our aim is the annual profit target over the twelve months of 2021 and so just another step in the process. We will have wins but will have many more near misses. But that is golf betting and the aim is long term profit.

We will be back Tuesday PM with our selections for this week at the Genesis Invitational.