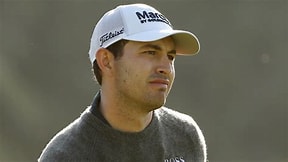 we did badly last week and lost eleven points, The cumulative profit to date for 2021 is +45 points. We do need to do much better from now on to hit our target of +100 points, but we have done it in previous years and so can do it in 2021.

Was won by Wunderkind Rasmus Hojgaard of Denmark. The twenty year old shot seven under par  on Sunday to win by one stroke. That was Rasmus’s third win on tour to date and has not yet had his twenty first birthday. But Bernd Wiesberger did hand it to him on the final hole. He only need a par to get his ninth win on tour. But he hit a very bad shot in to the water and carded a double bogey to not even force a play off. Not the type of thing you would wish to see from a potential Ryder Cup pick. Bye Bye Bernd.

Henrik Stenson continued his run of decent form in finishing third here. I guess that if he won the next two tournaments he would force himself in to Ryder Cup selection criteria.

Then we had a group of golfers who got themselves in to good position on Sunday, only then to play badly. We can include Sean Crocker, Matthew Jordan, Ross McGowan, Marcus Armytage, Callum Hill and Renato Paratore. Guido Migliozzi finished with a 65 to show a bit of form before competing in his home country’s Open.

Antoine Rozner found a final round 62 to cut through the field and finish in a tie for thirteenth place. John Catlin disappointed with a final round 72 after going well earlier in the week. Min Woo Lee carded two 67’s and a 66 but messed up his scorecard with a 74. Thomas Detry started 65, 65 but regressed badly over the weekend. James Morrison had an opening round of 6o but used up all of his best play then and ended up down in a tie for twenty seventh place.

Justin Harding opened with two 66’s but wrecked his card with a third round 74 and gave up after that. Andy Sullivan went 64 and 66 the first two days but stank over the weekend. Victor Perez could only manage a tied fiftieth place and his Ryder Cup dreams have gone.

So, perhaps one obvious betting strategy – Back Rasmus Hojgaard for every European Tour event he enters.

Patrick Cantlay got the better of Bryson DeChambeau in a six hole play off on Sunday to leap to the top of the Fedex leaderboard for the Championship next week. Either golfer had chances to win in the play off but Cantlay was the one to do so, holing an eighteen footer on the final hole of the play off. Cantlay had a stellar week with the putter, gaining fourteen strokes putting. easily a record for the Fedex play offs.

Four strokes back in third place was the inconsistent in 2021 Sungjae Im. Consistent all week with a worst round of 67, admittedly on an easy course for these guys. In fourth place was Rory McIlroy, whose second round 70 knocked him out of things. And in fifth place was a revitalised in recent weeks Eric Van Rooyen.

Top ten or tied finishes were achieved by – Dustin Johnson, Sergio Garcia, Jon Rahm, who was very average over the weekend, Sam Burns, Alex Noren and Abraham Ancer. DJ had a good weekend with a 65 and 66, as did Alex Noren with a 67 and 66.

Webb Simpson tied twelfth place with two 66’s on the weekend. Tony Finau finished with a 63 after getting off to a slow start after his win in the week before. Tony tied for seventeenth place. Justin Thomas failed to contend and finished in a tie for twenty second place. Scottie Scheffler finished on the same score as JT, that despite an opening round 73. Brooks Koepka was also in that tie.

Jordan Speith is out of form and finished tied thirty fourth. He did close with a 66. Louis Oosthuizen played and was down in thirty seventh place. Hideki Matsuyama had a poor week in forty sixth place. Xander Schauffele was further back in tied forty ninth place. Collin Morikawa, who still seems to be struggling with his back was in tied sixty third place. Phil Mickelson got round in a tie for sixty sixth place. That was equal last place.

And so we move on to the Tour Championship and the end of another season.