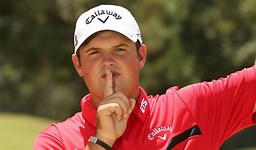 we lost 8 points last week and our cumulative loss for January was 9.34 points. Not good, but our target is 100 points profit in the calendar year and so no real damage done. Our sole winner was Paul Casey in Dubai as in play bet . Jon Rahm looked set to contend but could only record a par score on both Saturday and Sunday . I go in to more detail below as to how all of our selections did .

Was won comfortably by Patrick Reed in the end by five strokes. Patrick was joint first round leader and the same at the end of the third round . His week was shrouded in controversy after taking/getting a free drop when his ball plugged (but it did not) in the third round . Reed is no stranger to such controversies and made him even less popular with all involved in the game (if that is possible?) .I did likely miss him at 7/2 at the end of the third round as an in play bet . Patrick was very solid in the final round when others were moving backwards .

There were five golfers tied in second place at nine under par . Tony Finau finished well enough without ever looking like winning. His final round was a 69 . Henrik Norlander looks a good prospect with consistent high finishes . The Swede is making a name for himself in the U.S. and at big odds can likely place every now and again and even win on a bad week . Henrik had an opening round 73 but rallied well to contend for minor honours . Ryan Palmer opened with a 66 but could not break 70 the rest of the week . Xander Schauffele found some form over the weekend to move through the field . Perhaps he is back? And finally… Viktor Hovland . Viktor struggled over the weekend after carding a 65 on Friday . He was very in and out, playing well at times and then all over the place at other times . Viktor is in form at present and is one to watch, albeit he gets a bit shaky when in contention .

Will Zalatoris, the star of the Korn Ferry Tour, had another good finish in a tie for 7th . He was steady across all four rounds, but needed a low one to contend here . A golfer to watch though .

Jon Rahm also finished tied 7th at 8 under par. Jon was on that score at the halfway stage but failed to progress on the weekend for no obvious reason . Perhaps he is still getting use to his new Callaway clubs? I was very disappointed with his efforts as I thought that he was a good selection for us at Torrey Pines .

Francesco Molinari played well again to finish on 7 under par . He finished with a 66 and after a prolonged break in 2020 seems to be finding some form .

Rory McIlroy bubbled under again without looking like winning . A final round 73 was not good .

Carlos Ortiz was a joint leader going into the final round . However he scored a 78 on Sunday after a 66 on Saturday. I guess he used up all his good shots on Saturday !

Sungjae Im was very inconsistent here . Two 69’s, a 72 and a final round 78 . I think that the best way to be on Mr Im is going into the final round a few strokes back at a decent price and hoping he hits a streak as he was doing regularly in 2019 .

Hideki Matsuyama had a bad week apart from a second round 68 . He finished one over par, a full 15 strokes behind the winner .

Scottie Scheffler missed the cut after an opening round of 65! The 79 he carded on Friday did for him. He is yet to find form in 2021 .

The U.S. TV channels and podcasts continue to talk about Jordan Spieth. And…he continues to play very poorly. He missed the cut here and is a shadow of the player he was a few years ago. He has changed his coach but no improvement in sight yet .

Our pre tournament selection of Billy Horschel missed the cut . We did say he was streaky but his opening round of 76 did for him . The time to back Billy is likely wait to see how he is going at halfway and if he is in contention then get involved .

Harris English, another of our in play selections, also missed the cut after an opening 79 . We did give him the benefit of the doubt after a poor effort in his previous tournament . Clearly that was a mistake .

Jason Day missed the cut . He was touted for Torrey Pines but clearly failed to deliver .

Matthew Woolf withdrew after an opening round of 78 .

Paul Casey landed the win in Dubai by 5 strokes and so landed our in play bet . Casey was not great on the final day but his putter saved him a few times and he outclassed the field . That was his fifteenth win on the European Tour in a 23 year career . He did lead after the third round .

In second place was the inconsistent Brandon Stone . A closing par round on 72 was not near good enough to challenge Casey .

In third place was a favourite of this service, the Scot Robert MacIntyre. He did set out to challenge Casey on Sunday but had a poor inward nine holes to card a 74. He will be back and I do fancy him to go well at an Open Championship in his homeland .

Laurie Canter went well again and can win on tour in 2021 and get his maiden victory . A final round 72 meant he finished 4th, 10 strokes off the winner .

Bernd Wiesberger showed that he may be finding his 2019 form again by finishing 6th . An opening round 73 did him no good but he was able to record rounds under 70 on the other three days .

Sergio Garcia tied for sixth place despite having two rounds of 73 . Inconsistent or what? His other rounds were a 66 and a 67 .

Rasmus Hojgaard had his best finish for some time in a tie for ninth . He carded a 69 and a 67 on the weekend .

Our pre tournament win bet on Matt Fitzpatrick did not go well . He was average all week and his game is off at present .

Tommy Fleetwood had a poor weekend after an OK first two days . He tied with Fitzpatrick and Lee Westwood in a tie for 17th place .

Christiaan Bezuidenhout was good after getting over an opening 74 . He can win again on tour without doubt .

Tyrrell Hatton opened with a 76 and so put himself out of it . One of my rules is ‘never back last weeks winner’. But I did select him and paid the price for breaking that rule . Apologies for this selection .

Shane Lowry continues to look like a non contender. He finished with a 75 on Sunday in tied 27th .

Rafa Cabrero Bello was our each way selection at 40/1 after a very good effort the week before. His 66 on Saturday was the highlight for him . Sadly the other three rounds he played were nowhere near that and he just scraped into the top 40 .

Justin Rose continues to struggle and closed with a 77 .

Martin Kaymer continues to be bad . An opening 68 but three poor rounds after that .

Matt Wallace had a bad week but did play four rounds .

Collin Morikawa continued his run of playing poorly outside the U.S. He did play four rounds but not well .

Ian Poulter continues to struggle and missed the cut .

Not a good week for us but two decent tournaments to watch and study and take things from .

This coming weeks selections will be out on Wednesday lunch time this week.

Until then stay safe.