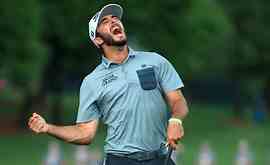 one of the main components of betting on golf is to find selections who will be in contention going into the  final round. We did do that with three of our picks. However the main component of successful betting is that your selections can convert their position into a win. Sadly again this week our picks failed to do that. We lost 7 points on the week. But as I keep repeating our 2021 target is 100 points profit by Christmas. And so we press on, trying to improve and return to profit for the year.

There is an analysis of the Genesis Invitational below, which includes how our selections played and what we can take from the tournament. Please make the effort to read the analysis.

The tournament was won by local L.A. boy Max Homa (pictured above), who beat Tony Finau in a play off at the second extra hole (the 14th). His birdie three was enough to take the title from Finau, who carded a 64 on Sunday to run down the leaders. Homa carded a 66.

Finau joined the tournament lead late on Sunday and then struggled to par the 18th but did so. The door was open for Homa after two great shots on the last hole left him a three footer for the win. But it rimmed out and so there was the need for the play off. We have said in the past that Finau’s best chance of a win was to come with a late run from off the pace, which is what he did here. Homa went off a 66/1 chance and opened on Thursday with a 66, which he repeated on Sunday. Friday and Saturday saw him score 70’s.

In third place was first round and long term leader Sam Burns. Sam recovered from a 74 on Saturday to get off to a score of three under over the first nine holes. However when he hit the tough run of holes that is 12 to 14 he unravelled. He battled back with a birdie in the final hole but was one stroke short of a place in the play off. In fourth was the young Aussie Cam Smith, the General Custer look alike. The course suited his strategic but attacking style. He finished three strokes off the lead.

There was a tie for fifth – Jon Rahm, who showed some decent form; Viktor Hovland, very solid again and our in play selection Matthew Fitzpatrick. Fitzpatrick had one hole to play from the third round on Sunday morning, where he dropped a shot and so allowed Burns a three stroke lead going into the final round. He started poorly in the final round and dropped two strokes. He did recover them before the turn but could never get it going over the final nine holes. This was a big chance for him on the USPGA tour.

Other golfers to note who made the cut – Francesco Molinari was in a tie for eighth. A 73 in round two ruined his chances; Will Zalatoris had a 75 on Saturday that did for him. Other than that he had three sub 70 rounds;  Dustin Johnson was bad for him on Sunday, carding a 72 and letting down our saver selection bet; Xander Schauffele tied 15th with four solid rounds but he is missing the edge to contend at present; Jordan Speith faded over the weekend and may have been fatigued after his recent efforts; Patrick Cantlay, a selection of ours, was very average after a fine 67 on Thursday. Likely one to avoid until getting his spark back; Scottie Scheffler was inconsistent again, scoring 67,74,74,66. So some signs of him getting it together again.

Brooks Koepka had a 77 on Saturday to ruin his chances of going back to back; Adam Scott, the defending champion, went 73 on Friday and 76 on Saturday, only to rally on Sunday with a 66. He finished tied 38th with Koepka; Joachin Neimann had a 78 on Saturday after a decent first two days; Collin Morikawa continues to struggle and finished tied 43rd.

Nate Lashley, our pre tournament 150/1 selection struggled apart from Friday when he carded a 68; Matthew Woolf continues to struggle and finished in a tie for 64th place.

Notable golfers to miss the cut – Sergio Garcia, whom the course should have suited; Abraham Ancer, who has not recaptured the form he showed in Hawaii; Bryson DeChambeau, who found the intricacies of the course a bit much; Hideki Matsuyama; three times champion here Bubba Watson; recent winner on tour Si Woo Kim; Rory McIlroy who carded 73 and 76 and Justin Thomas, 77 and 73. JT struggles with his putting and with the recent death of his grandfather, whom he was close to.

Selections for this week will be onsite Tuesday PM, so look out for the email informing you of such.