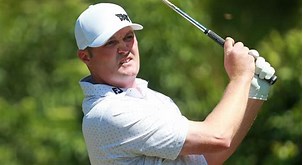 We had another near miss with Xander Schauffele finishing runner up at The CJ Cup despite shooting a 66 in the final round. His poor third round and his messing up on the par five 16th in the final round cost him a tournament win he should have had. Credit to the winner Jason Kokrak who finished with a 64 to win the tournament. We made a loss of 11.2 points on the week. We now have a cumulative profit for 2020 of 56.485 points to date.

The Scottish Championship presented by AXA.

Our sole selection Eddie Pepperell played well enough for three and a half rounds but his poor performance on the outward nine in the final round killed any chance he had. He finished joint sixteenth. I was happy enough with the pick in a field of out of form golfers. Perhaps the 14/1 was a bit skinny for Eddie though?

The tournament was won by Adrien Otaegui from Spain. He blitzed the field in the final round to win by four strokes. Otaegui had had some low scores on tour but has struggled to put four rounds together in the past. Runner up was Matt Wallace, who choked a bit in the final round (we should have laid him at 2/5!!).  The in form Aaron Rai finished third and Englishmen Chris Paisley and Garrick Porteous were fourth. Rai is still holding his excellent current form, but for how long? Good efforts from them in cold windy conditions.

Other golfers to note – Englishman Marcis Armitage was a very good 7th. He has had a few top ten finishes in 2020. Sebastian Soderberg also clocked up another top ten finish. Lee Westwood achieved another top twenty finish without ever threatening to win. The inconsistent Brandon Stone showed some signs of life here, finishing in a tie for 16th. Sam Horsfield, after winning twice earlier in this abridged season has lost his form but did make the top fifty here. Robert MacIntyre pulled out after his first round 78. He has not been good since returning from injury and is one to avoid at present.

We now move on to warmer climes for the rest of 2020, starting with Italy this week.

The CJ CUP in Las Vegas

Apart from our near miss with Xander Schauffele our bets did not go well in Vegas. Justin Thomas struggled with the putter again and dropped some sloppy strokes really. He finished in a tie for twelfth. I think we will give him a miss until he wins or goes close again. Alex Noren had a shocker and finished one from last of those who completed all four rounds. Our tournament match bet went badly and did not look to be value after two rounds. It was touch and go until the final round when Berger started poorly and never recovered. Apologies for that one as it was a poor pick. The in play pairings win double started off well over the first nine holes on Sunday but Rory had a bogey blitz coming home and imploded. Xander was beaten by the winner anyway, but we will try again with such a bet this coming week.

The tournament was won by Jason Kokrak, who broke his tour duck on the 203rd attempt. His final round 64 was too good for everyone else. Tyrrell Hatton went well again after travelling 5,000 miles plus following his win at Wentworth. He finished in a tie for third and can hopefully keep this going for The Masters next month. Also in a tie for third was the excellent ball striker Russell Henley.

Other golfers to note – Joachin Niemann finished with a 66 in sixth. One place behind him was Bubba Watson, after opening up on Thursday with a 74! He looks to be warming up nicely for Augusta again. Harris English had a poor start with a 75 but battled back to finish tenth. He may be coming back in to form again? Sebastian Munoz got another top ten finish here. Ian Poulter made the top twenty again with a tied twelfth. Collin Morikawa was steady but ordinary in a tie for twelfth. Jon Rahm was still a bit off and his tie for 17th was very average. Rory’s disastrous back nine ended with a 74 and a tie for 21st. Another one to swerve until he can string four decent rounds together. Brooks Koepka returned to action and hopefully he can now stay fit and improve before The Masters is played?

Jordan Speith benefited from it being a no cut tournament by making it to a weekend and carding a 69 and 67. Justin Rose struggled again down in 52nd place. Scottie Scheffler has not yet got his form back after recovering from Covid 19, tying with Rose and the also ran’s. Brendon Todd was also tied 52nd on a course that would not suit him. Tommy Fleetwood continues to struggle and was in the 70’s all four rounds in finishing 59th. Paul Casey was a sad tied 69th. What is up with him, tiredness? Gary Woodland continues to struggle and was down in 72nd place. Jason Day was going well and was in place contention going into the final round. However he withdrew on the second tee on Sunday with an injury. He does struggle with injuries these days, his back issues hold him back.

Not a good week for us but we move on to the tournaments in warmer climes on both tours and look set to get a win to get us to 100 points profit for 2020.