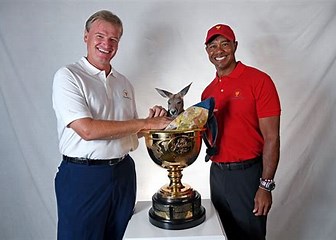 We had a losing week with our bets. In The Presidents Cup Louis Oosthuizen had a 2/3 place in the Top International market, with a loss of 0.48 points. Patrick Reed performed poorly and only gained one point in the match. In the QBE Shootout McDowell and Poulter missed a place by one point in a very tight tournament, with the top eight being seperated by five points over three rounds.

The video function on my laptop is not working at present and so we will have to make do with a written analysis of what went on. We also pick up on what to take out of the play that took place in terms of players who went well and those that did not.

The Presidents Cup – The American team came back from a poor first day to triumph over the International team. The four day schedule suited the Americans, as they were able to acclimatise in time to the Australian conditions and dominate the final days singles matches. After the first and second days the Americans drifted in the betting to odds against in the betting, which looked good value if they could stay in touch with the International team going into the singles. We did highlight this in our update email sent on Thursday evening.

Of our bets Louis Oosthuizen gained two and a half points from a possible four. He was rested for one series of matches. He finished tied third as Top International for a share of place money. Abraham Ancer was Top International player with 3 1/2 points from five matches. He played very well but tired on the last day to be beaten in his singles match. Sungjae Im scored three points for his team and maintained a high standard all week. Patrick Reed had a bad week apart from winning his singles match. That was after his caddie had been disqualified for pushing a spectator when the said person was allegedly being abusive to Reed. This was a bad pick on our part following on from the issues he had the previous week. Tiger Woods captained the Americans well and played solidly to gain three points for the team. He seemed to pair up well with Justin Thomas, who also gained three points on the week. Patrick Cantlay and Xander Schauffele also scored three points on the week. The only player from both sides not to win a single point was Bryson De Chambeau.

A good practice week for Tiger Woods as captain, in preparation for getting the job in The Ryder Cup in the future.

In the QBE Shootout pairs competition in Florida, our pick of McDowell and Poulter missed a place by one point. Eight pairs finished within five points of one another over three rounds. Our pair got off to a slow start on day one and that ultimately cost them a place in this event. As it was so congested in terms of final scores between those competing that it is hard to take much from the results.

This week we stay in Australia for our last tournament of 2020, when the Australian PGA Championship takes place. A number of the players who took part in The Presidents Cup will be competing there and so it should be a good event to watch and get stuck in to. More on that in our selections post on Tuesday.

All the best Martin.