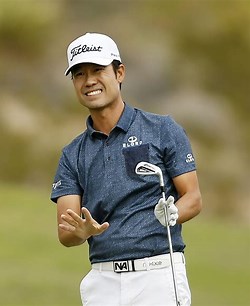 we made a profit of 5.66 points on our bets at The Sony Open, with Joachin Niemann and Collin Morikawa both part placing (5/6 of a place) and narrowly missing the win. The second week of 2020 where we have gone close to the win. If you are interested in the maths of the profit calculation email me at the admin address and I will go through it with you. I have checked it three times.

Below I go in to detail on what happened in Honolulu, how our selections fared and what we will take from the tournament in the future?

The winner was Kevin Na, who hit a very hot streak in the final nine holes with excellent approach play and never looking as if he would miss a putt. When he does this Na looks a top five golfer in the world. You have to catch him on a streak day and I did not with our in play bet! The 7/1 was a good price going into the final round for him and I should have picked up on that. A lesson learned by me. I would not want to back Na pre tournament unless he was 100/1 +, as he can be bad several weeks each year. However has has now won four times in two years now.

Our pre tournament pick Joachin Niemann finished one stroke behind Na. He started slowly and had a bogey that knocked him back. He did not get going until the final nine holes and did miss some crucial putts by very small margins. He and we should have won this one!!

Tied with Niemann in second was Chris Kirk, who had to finish on the top three to retain his tour card, which he did . Kirk has had alcohol issues in the past and is trying to give it another go after having treatment for his addiction. I do not think that he is one to rely on but we shall see?

In a tie for fourth place were – the pre tournament favourite Webb Simpson, Marc Leishmann and our in play bet Brendan Steele. They finished two strokes off the winner. Simpson played well enough and finished well but struggles to win in comparison with his talent I think. I can back him at 20/1 plus but not shorter. Leishmann blows hot and cold but was very consistent at Walalee, carding four x 65 . Brendan Steele was all set for the win going into the final nine holes with a three stroke lead. However he became defensive and lost his rhythm and dropped strokes. His regular caddie was not with him this week and he did not get the necessary kick up the….. which he needed. He should have gone on to finish 23 under and win by 2 strokes in my book.

Another of our pre tournament selections, Collin Morikawa, was a further stroke back in a tie for seventh. Collin finished well enough with a 64 but the 67 he scored on Saturday put him out of things. Tied with Morikawa were – Patton Kizzire, who played well over the weekend with a 65 and 64; Billy Horschel, who looked on a hot streak on Sunday until the final few holes; Daniel Berger, who had a good weekend with a 64 and 66, but the 68 on Friday pushed him back in the field. What have I said about Berger in the past? ‘He needs to eliminate that one poor round per tournament’.

Other golfers I will pick up on:

Mackenzie Hughes – a 69 on Friday on this course is not good. However his other rounds were good and so we can look at him when he goes off at 100/1+ pre tournament.

Hideki Matsuyama – OK but not great again. Six strokes off the winner despite the course being easy. Not one to back at less than 33/1 in my book.

Harris English – started with a 70 then showed some life but nothing special. Likely was tired after winning last week.

Sungjae Im – Well back in a tie for 56th and very average and one to swerve at present I think?

Sebastian Munoz – our third pre tournament pick. Made the cut just but was very ordinary all week and finished in a tie for 65th. A poor pick for which I apologise.

Eric van Rooyen – is being talked up on the USPGA in recent times but failed to deliver here, missing the cut.

Abraham Ancer – was well touted by pundits for this but missed the cut. So two weeks in Hawaii not playing that well .

So, we move on after another near miss but confident that the service can deliver and will return the  profit target in the calendar year.

This week we are off to California on the USPGA Tour. The European Tour gets underway as well, initially in the Emirates.

Selections will be onsite Tuesday PM.

Dont forget to give us feedback via admin@golfbetsgold.com .