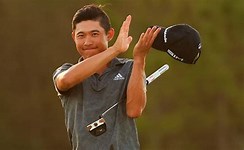 We made a profit of just over 2 points at The Concession . Viktor Hovland, our main pick, finished in a tie for second place. The 8 he took on a par 4 on Friday scuppered his win chances a bit! Our other pre tournament pick Patrick Reed struggled on Sunday and missed a place by one stroke. Our in play bet on Rory McIlroy failed to fire in the final round. To repeat myself, our target is to make 100 points cumulative profit in calendar year 2021. There will be peaks and troughs along the way.

My analysis of the tournament and what I would take out of it follows.

The World Golf Championship By Workday at The Concession.

The tournament was won by Collin Morikawa (pictured above), one of the games up and coming talents. Already a major winner but out of form recently, Morikawa was well suited to this ball strikers course. His 64 on Friday paved the way for this success. He did start the final round a bit shaky, dropping a stroke on the second hole. But he recovered and took control around the turn and never looked like being caught by the pack.

In a tie for second place, three strokes back were, our main selection Voktor Hovland, Brooks Koepka and local boy Billy Horschel. We have already mentioned Hovland’s last hole 8 on Friday. But he recovered well and fought back to challenge Morikawa at times. Koepka was solid and seemed to be carrying a neck injury. But he could not break 70 on either day over the weekend. Horschel was solid but could not find a low score on Sunday to challenge for the win.

In fifth place was a back to some form Scottie Scheffler. He made a run in the final round but ran out of steam, as his erratic driving eventually caught up with him. Tied in sixth were Louis Oosthuizen, Webb Simpson and Rory McIlroy. Decent form shown by all but missing a  bit of magic you need to win. Webb finished with a 72 when many were expecting him to challenge. He has not played that much in covid times and may need to do so more regularly to get back to winning ways? Jason Kokrak and Patrick Red were tied for ninth place. Kokrak played well but nothing special, but Reed could only muster a 72 in the final round when it was time to push the buttons and go low.

Other decent efforts to note – Cam Smith tied for eleventh place despite a 77 on Saturday, when he went in to the water on five separate occasions. So the good form is still there mostly. Kevin Na tied with Smith despite an opening round 73. Matt Fitzpatrick was also in that tie but disappointed over the weekend with a 72 on both days. Tony Finau had the same weekend as Fitzpatrick and still awaits that win. Carlos Otriz finished 69, 66 after a poor start.

Xander Schauffele struggled all week in a tie for 39th place; Kevin Kisner had a good first two days but then carded an 80 and a 72; Justin Rose struggled again, his best round of the week being a 71; Dustin Johnson, who opened with a 77, then had two 69’s but finished with a 78. Finally Matthew Woolf who withdrew again after round one after scoring 83.

In conclusion a decent tournament on a new course on the tour. A bit too many water hazards for me. The Alligators lurking in said water made it interesting at times.

Selections for this week will be out Tuesday PM, so look out for the email.